According to folklore, the ninja were the descendants of tengu – legendary beings with long noses and hawk-like heads. These beings lived in the mountains of Japan and possessed supernatural powers.

More likely than not, Shugendo yamabushi (mountain monks) – rumoured to possess extraordinary martial art skills, meditative wisdom and medicinal knowledge – inspired the Japanese version of the tengu folklore. Yet, many sources also refer to mountain monks as the disciples of the tengu.

Nonetheless, here is what William Elliot Griffis wrote about the tengu, roughly one hundred years ago, as an American who taught in Japan in 1871.

The Tengus, or the Elves with Long Noses

Curious creatures are the tengus, with the head of a hawk and the body of a man. They have very hairy hands or paws with two fingers, and feet with two toes. They are hatched out of eggs, and have wings and feathers, until full grown. Then their wings moult, and the stumps are concealed behind their dress, which is like that of a man. They walk, when grown up, on clogs a foot high, which are like stilts, as they have but one support instead of two, like the sort which men wear. The tengus strut about easily on these, without stumbling.

The Dai Tengu, or master, is a solemn-faced, scowling individual with a very proud expression, and a nose about eight finger-breadths long. When he goes abroad, his retainers march before him, for fear he might break his nose against something. He wears a long grey beard down to his girdle, and moustaches to his chin. In his left hand he carries a large fan made of seven wide feathers. This is the sign of his rank. He has a mouth, but he rarely opens it. He is very wise, and rules over all the tengus in Japan.

The Karasu or crow-tengu is a black fellow, with a long beak, in the place where his nose and mouth ought to be. He looks as if some one had squeezed out the lower part of his face, and pulled his nose down so as to make a beak like a crow’s. He is the Dai Tengu’s lictor. He carries the axe of authority over his left shoulder, to chop bad people’s heads off. In his right fist is his master’s book of wisdom, and roll of authority. Even these two highest in authority in Tengu-land are servants of the great lord Kampira, the long-haired patron of sailors and mountaineers.

King of the Tengus – The Dai Tangu of Kurama mountain

The greatest of the Dai Tengu lived in Kurama mountain and taught Yoshitsuné. This lad, while a pupil in the monastery, would slip out in the evening, when the priests thought him asleep, and come to the King of the Tengus, who instructed him in the military arts, in cunning, magic, and wisdom. Every night the boy would spread the roll of wisdom before him, and sit at the feet of the hoary-headed tengu, and learn the strange letters in which tengu wisdom is written, while the long-nosed servant tengus, propped up on their stilt-clogs, looked on. The boy was not afraid, but quickly learned the knowledge which birds, beasts and fishes have, how to understand their language and to fly, swim and leap like them.

When a tengu stumbles and falls down on his nose, it takes a long while to heal, and if he breaks it, the doctor puts it in splints like a broken arm, until it straightens out and heals up again.

Some of the amusements in Tengu-land are very curious. A pair of young tengus will fence with their noses as if they were foils. Their faces are well protected by masks, for if one tengu should “poke his nose” into the other’s eye he might put it out, and a blind tengu could not walk about, because he would be knocking his nose against everything.

Two old tengus with noses nearly two feet long, sometimes try the strength of their face-handles. One fellow has his beak straight up in the air like a supporting post, while the other sits a yard off with his elastic nose stretched across like a tight-rope, and tied with twine at the top of the other one’s nose. On this tight nose-rope a little tengu boy, with a tiny pug only two inches long, dances a jig. He holds an umbrella in his hand, now dancing, and now standing upon one foot. The tengu-daddy, whose nose serves as a tent-pole, waves his fan and sings a song, keeping time to the dance.

There is another tengu who sometimes quarrels with his wife, and when angry boxes her ears with his nose.

A lady-tengu who is inclined to be literary and sentimental, writes poetry. When the mood seizes her she ties the pen to her nose, dips it in ink and writes a poem on the wall.

A tengu-painter makes a long-handled brush to whitewash the ceiling, by strapping it to his nose.

Sometimes the little tengus get fighting, and then the feathers fly as they tear each other with their little claws which have talons on them shaped like a chicken’s, but which when fully grown look like hands.

All the big tengus are fond of trying the strength of their noses, and how far they can bend them up and down without breaking. They have two favorite games of which they sometimes give exhibitions. The player has long strings of iron cash (that is, one hundred of the little iron coins, with a square hole in the centre). Several of these he slides on a rope like buttons on a string, or counters on a wire. Then he lifts them off with the tip of his nose. Sometimes his nose bends so much under the weight that the coins slip off. Whichever tengu can pick off the greater number of strings without letting any slip, wins the game, and is called O-hana (The King of Noses).

Another balances hoops and poles on his nose and throws balls through the hoops; or he poises a saucer of water on the tip of his nose without spilling a drop. Another fellow hangs a bell from the ceiling. Then, with a handkerchief tied loosely round his head, he pulls his nose back like a snapping-turtle’s beak, and then suddenly lets go. His nose then strikes the bell and rings it. It hurts very much, but he does not mind it.

The tengus have one great fault. They love liquor too much. They often get drunk. They buy great casks of rice-wine, sling them round their necks, and drink out of long cups shaped like their faces, using the nose for a handle. A drunken tengu makes a funny sight, as he staggers about with his big wings drooping and flapping around him, and the feathers trailing in the mud, and his long nose limp, pendulous and groggy.

When the master of the tengus wishes to “see the flowers,” which means to go on a picnic, he punishes his drunken servant by swinging the box of eatables over the fellow’s red nose. Putting the end over his shoulders, he compels the sot to come along. It sobers the fellow, for the weight on his nose and the pulling on it hurts dreadfully, and often makes him squeal. 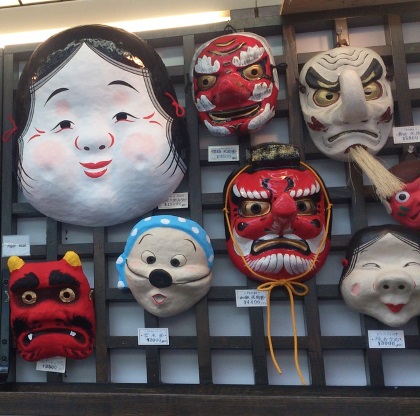 Oyama, a mountain near Tokio, is said to be full of these long-nosed elves, but many other mountains are inhabited by them, for they like lonely places away from men.

Dancers often put on masks like the tengu’s face and dance a curious dance which they call the Tengu’s quadrille.

The tengus are very proud fellows, and think themselves above human beings. They are afraid of brave men, however, and never dare to hurt them. They scare children, especially bad boys. They watch a boy telling lies and catch him. Then the tengus pull out his tongue by the roots, and run away with it.

When a tengu walks, he folds his arms, throws back his head till his nose is far up in the air, and struts around as if he were a daimio. When a man becomes vain and carries his nose too high, the people say “He has become a tengu.”

This tale by William Elliot Griffis is now under public domain. I have retained his olden spelling quirks and added subheadings to make it easier to read on the web. For another tale by Griffis, take a look at what he has to say about Jiraiya. I have also included a brief history about him there.

William Elliot Griffis (September 17, 1843 – February 5, 1928) was an American, who was invited to Japan by Matsudaira Shungaku. He was a teacher, prolific traveller and writer who contributed to the modernisation of Japan.

Han Mu Do – the Korean Martial Art that Pursues Balance

How to Reach Your Athletic Vision as a Modern Warrior? – 5 Steps

The Tale of The Gallant Jiraiya (Original Folklore) – from Edo Period