Every martial artist thinks they know who Bruce Lee was. You probably think so too.

But do you really?

There was more to Bruce Lee than his reputation as a public figure and martial artist. Who was he with family and friends? How was he like in high school?

Letters of the Dragon – Letters written by Bruce Lee

Bruce Lee: Letters of the Dragon compiles Bruce Lee’s letters to his family, peers, students and fans between the late 1950s to early 1970s. Sending letters back then is similar to sending text messages today. They contain his personal thoughts – casual, unscripted, spontaneous and at times intimate.

And these thoughts evolved over the course of decades – from his high school letters to the last letter before his death. You will also witness his philosophy evolving with each new letter to his peers.

Bruce Lee was born to Hong Kong parents in the United States. This in itself put many obstacles in his way back then when breaking into the martial art movies industry.

Also, where martial artists discuss well-established fighting concepts today, these concepts didn’t exist back then. Chinese kung-fu, in particular, was at its infancy of being introduced to the west. And many misconceptions existed.

Even though Eastern martial arts had spread later on, Hollywood still sidelined actors of asian-descent. They were only chosen for roles that featured asian stereotypes. Little care was given in distinguish the various asian cultures (i.e. Chinese, Japanese, Korean and so on).

One of Bruce Lee’s letters noted the discrepancy over him playing the role of Kato (a sidekick of Green Hornet) as a “Chinaman”. Kato was clearly a Japanese name but the character was doing Chinese kung-fu.

This particular letter was addressed to Fred Sato in 1966 and can be found in Letters of the Dragon.

Until I read his letters, I never knew how much Bruce Lee was like a typical martial arts practitioner of today. There were things he did and said that you may relate with. Outside of his martial arts persona, he was also sometimes silly with his wife and close friends.

Here were some things that you may relate to:

You will find Bruce Lee’s letters (in the book) to Jame Yimm Lee (friend and mentor) to be filled with diagrams and sketches of martial arts techniques.

Bruce Lee, the genius with a vision who broke all barriers

What made Bruce Lee different from his peers and fellow pioneers was his crazy vision for the martial arts world and determination to achieve it. He was positive despite the odds.

There were even times when he struggled against prejudice in the movie industry, with financial uncertainty, with developing groundbreaking concepts for Jeet Kune Do and when dealing with an injury. But his positive attitude did not waver. His core message – implicit in his letters – was that negativity shut your eyes to solutions.

This positive attitude was evident in his numerous letters to Jhoon Goo Rhee, a fellow pioneer in Eastern martial arts (known as the father of American Taekwondo). While I’m not sure what Jhoon Goo Rhee wrote, Bruce Lee’s response suggested that he worried too much about his endeavours.

In short, Bruce Lee focused his efforts on making opportunities, than relegating parts of his mind to worries and negativity. He backed his lofty ambitions with tremendous effort and adaptability. If one way doesn’t work, he would take another path.

To get some insight over Bruce Lee’s thoughts and personal interactions, I recommend reading Bruce Lee: Letters of the Dragon. It is a refreshing change from books on technical martial concepts and second-hand accounts that praises the man, without acknowledging his vulnerabilities.

And, this November, Tuttle Publishing has redesigned the cover for this book, in time for Bruce Lee’s birthday.

Also, I have opted not to reveal much about what the letters state. But…

If you want to know what some of his letters reveal, try out my Bruce Lee Trivia Quiz based on Letters of the Dragon.

The quiz answers will reveal admirable and funny facts about Bruce Lee. Try it now and share your results!

Bruce Lee: Letters of the Dragon 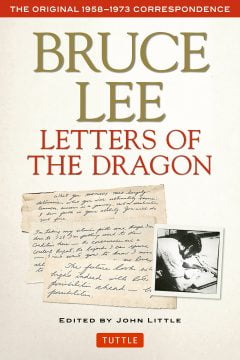 Disclosure: ‘Bruce Lee: Letters of the Dragon’ was given to me by Tuttle Publishing in return for my honest review or press release over their new cover redesign. I have not and will not fake my reviews for monetary or other benefits since this is against what Way Of Ninja and I represent. Also, the links provided to get the book via Amazon will allow Way Of Ninja to earn a small commission but will not cost you more.

26 Army Fitness Tests from Different Countries Around the World