Will Posing like a Superhero Boost Your Confidence? – 2 Minute Hack

Have you ever felt crippling anxiety at important interviews? Strike a power pose before you walk in!

That’s Amy Cuddy’s advice to get yourself into the right mental state for high-stakes events. This includes job interviews, negotiations, dates and networking.

Yet, several scholars have expressed skepticism towards its  effectiveness.

So, does the science behind power-poses really work? And is there a way to make it work even better?

What You Will Learn About Power Poses

What is Power Posing?

When you power pose, you adopt body language (and postures) that are open, takes up space and conveys power.

The idea behind it is that confident people naturally display power poses. The posture is a byproduct of their state of mind. Her study (with three other social psychologists) asserts that the reverse is also true. This means adopting a confident body language can trick your mind into feeling more confident.

Thus, according to The Benefit of Power Posing Before a High-Stakes Social Evaluation (study by Amy Cuddy and her colleagues), adopting a high-power posture help people do better in a high-stakes situation.

Amy Cuddy would then go on to introduce these findings to the world through her TED talk below. She proposes that adopting a high-power posture for a few minutes can affect your state of mind and make you fell more powerful.

So, Why Do Power Poses Work?

When we feel small or weak, we physically close ourselves off. We unconsciously wrap ourselves with our arms or hide ourselves from others.

For example, imagine standing before an intimidating group of people. This could perhaps be at an interview into the company of your dreams. As soon as you begin to diminish your presence, you begin to lose power before them. You begin to disappear.

On the other hand, when you assume more open and big postures, you actually feel open and dis-inhibited.

Think of the peacock with his gorgeous tail feathers on display or a gorilla pounding on his chest. These speak volumes to us—even though we’re not directly part of those animal communities.

So, the theory is that posture can affect your mental state, which then reinforces the mental states. Performing power poses for a few minutes, thus, can help alter your behavior to be more confident in high-stakes situations. 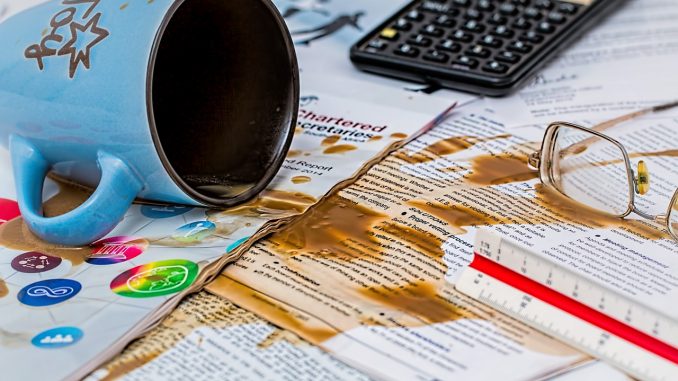 Others have weighed in on the research by Cuddy et. al (2012), and debated on the effectiveness of power posing.

One study by Ranehill et. al (2014) repeated the exact study with a larger sample of volunteers. But they failed to “confirm an effect of power posing on testosterone, cortisol, and financial risk taking”.

This means the resulting change in hormonal changes (present when we feel powerful) was actually negligible.

So, results in hormonal changes were actually non-existent or negligible.

Cuddy and her co-authors responded with a scholarly review of 33 independent studies on expansive and contractive postures (i.e. power posing), which included the findings of Ranehill et, al (2014).

While those studies observed behavioral changes, they conceded that the effects on hormones needed further tests.

Her co-author, Dana Carney, has made her stand clear that she does not believe the effects of power posing are real. This prompted Slate to publish an article about Cuddy’s research making an overreach when claiming the effectiveness of power-posing.

Does that mean that power poses don’t work?

So, there may actually be some truth in power posing. Or, at the very least, it may work due to a powerful placebo effect.

The only thing that cannot be detected is the changes in hormones.

Now, these high power poses are not some secret gateway to better confidence and career success. Rather, they should be used with visualization to make them more effective.

Visualization is often used in psychological practices — like sports psychology — to help improve an athlete’s performance.

As a dancer, I use visualization to achieve a certain sense of movement. In essence, this is adapting to phrases like, “flap your arms like a bird,” or “flow like water.”

Power poses root us directly to human and animal poses that, within our subconscious mind, connect to dominance and strength. Combine that with visualization to make it effective.

Do any of these high power poses – in private – before an important event. It will make you feel more confident and resolved.

Just two minutes of positive visualization of a stronger you, while maintaining a powerful pose in private. 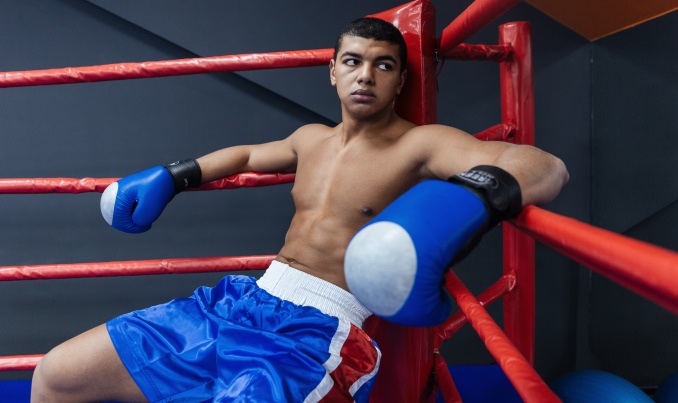 Some of us might look at these people in the subway with something of disgust (especially in Japan), because they take up so much space. However, there’s no denying that when you take up space, you literally dominate the space around you.

Kind of like how samurai shogun used to sit when giving orders prior to war.

Because of the intimidation factor, channel your inner warrior in private. If there’s something you need to seize control of, like a business proposition or some kind of trade deal, this is the pose for you.

There’s something powerful yet comfortable about this posturing, right?

We often see this pose when a major diplomat is on the phone, kicked back and discussing international business.

Do this pose alone before an interview, a presentation, or prior to discussing loaded information. Focus your mind on the ceiling and beyond. You will feel more in control, calm. 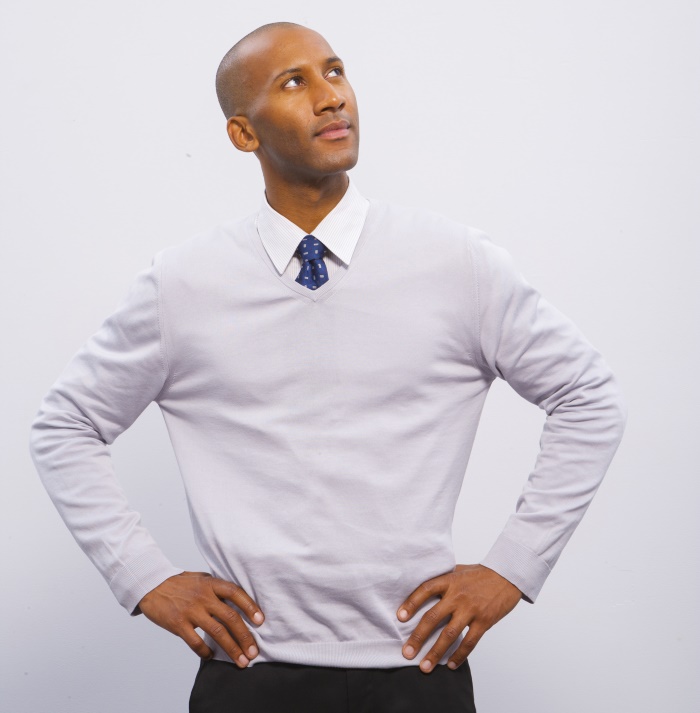 The reason this posture comes across as strong is because you are quite grounded here. You are basically pointing to your center of gravity (the core) with your fingertips. Your feet are in line with your hip bones or slightly farther apart, providing you with a firm anchor to the earth.

A wide chest means more expansive breathing. Just imagine a cape flowing in the wind behind you, and you can tackle anything.

Do this superhero pose in private for one to two minutes before going on stage, giving a presentation, meeting a potential partner (romantic or platonic), or moving forward with your day.

The example shows that her arms are wide, her chest is open, and her fingers are posed at the tips—which lifts the base of the palm. That means there’s a lot of energy cycling through the upper body.

Got an intense meeting coming up with HR? Headed to a debate?

This what any assertive CEO is known to do during group discussions and presentations. They either lean into the podium or put their hands down against the table and say, “Okay, people. We need to get this stuff done. Now.”

Doing this means you will command authority and attention, simply because your hands are grounded and you’ve centered yourself in front of the crowd. 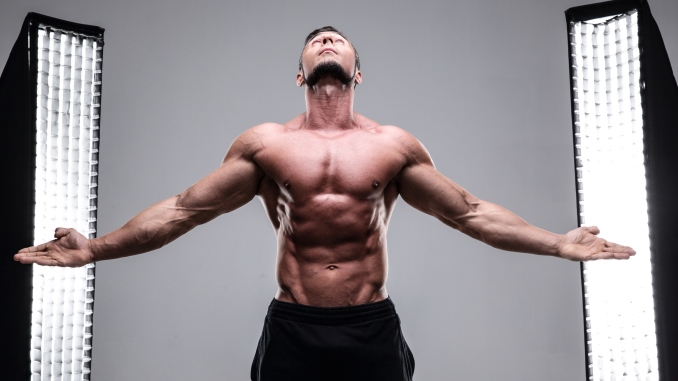 Aside from the slightly more masculine touch of a broad and open heart plus the wide arms, you are essentially in one of the most grounded postures known to humankind.

What the wide arms do is give a touch of gregariousness and enthusiasm that others will perceive as, “Talk to me. I’ll make you feel comfortable.” Or, “who wants a hug?” If you are energetic and passionate, others will be inspired by this too.

I recommend this one for going on dates. The energy you gain for this is likeable and affable, meaning you can conserve with people more easily.

Key Points: The enlarged V position of the arms, wide chest. You don’t necessarily have to skip joyfully, but that always helps.

The arms up in the V-shape have been proven to be done by both those with sight or blindness. A psychologist named Jessica Tracey looked at this shape and found that we don’t have to learn it. We just do it.

Energy radiates outward from ourselves into the world around us. This expression of joy comes from within, and many know that honest emotion is one of the most powerful things in this world.

There’s no reason not to emit joy—but imagining victory might help you clinch it that much faster. Imagine crossing the finish line first or getting the K.O. in your next upcoming sporting event, and then do this pose. The chances of winning increase when you believe in yourself, after all.

Cuddy’s book, Presence: Bringing Your Boldest Self to Your Biggest Challenges sums it up:

“When our body language is confident and open, other people respond in kind, unconsciously reinforcing not only their perception of us but also our perception of ourselves.”

As a dancer, yoga instructor, and psychology major, I am honestly split down the middle by Cuddy’s research. At the very least, independent studies have found observable changes in behaviour, after posing in a powerful body language.

So, find somewhere quiet where you can adopt any of the six power poses (for a few minutes), and visualize feelings of power and confidence. You will have a better mental state to excel.

Note: This is a collaborative article by Valerie Taylor and Logen Lanka, with opinions from both.

11 Reasons Why You Should Compete in Obstacle Course Races