Han Mu Do – the Korean Martial Art that Pursues Balance

Han Mu Do is a style of Korean martial arts deeply rooted in balance. It was founded by Grandmaster He-Young Kimm, who felt that there were philosophical gaps between Taekwondo, Hapkido and Judo. And so, he wanted to create a style that would combine aspects of all three.

In order to do so, Kimm established the Han Philosophy.

The major tenets of the Han Philosophy are as follows:

These teachings extend outside of the dojo, offering a life philosophy that focuses the inner workings of the mind.

The emphasis placed on achieving balance between one’s mental and physical condition during training sets Han Mu Do apart from other martial arts. The roots of this central theme extend deep into Korean history.

Ancient warriors in Korea were expected to be both physically fit and mentally adept. Doing so not only made warriors better prepared to analyze strategy but also allowed them to retain their composure when injured in battle. Han Mu Do pays respect to this ancient balance and has made it the central tenet of the practice. 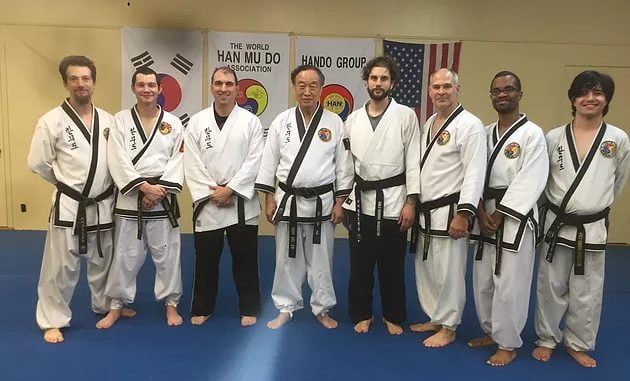 Han Man Do employs a varied attack style, incorporating elements of striking, throws and submissions. The core movement, used in both attack and defense, is the infinity movement (a figure 8 on its side).

Also, Han Mu Do focuses on constant fluidity of movement, with emphasis on balance between ‘hard’ and ‘soft’ techniques.

A hard technique denotes the use of force to counteract force. You can observe this in karate when a block is used to stop an attacker’s arm.

By contrast, Han Mu Do matches a hard technique with a soft technique. The strategy of a soft technique is to utilize the force exerted by an attacker against them. What’s used prominently in Han Mu Do are avoidance and deflection – trying to bring the opponent to the ground in order to immobilize them.

Differences between Han Mu Do and Hapkido

Grandmaster He-Young Kimm studied under Grandmaster Ji Han Jae, the founder of Hapkido. This relationship explains Hapkido’s influence in Han Mu Do. Despite their similarities, however, there are some key differences between the two styles.

One distinct difference is that Hapkido is a more aggressive style than Han Mu Do.

In Hapkido, hard techniques occupy a more prominent role. Most of the hand strikes used are associated with Taekwondo and Tang Soo Do.

Han Mu Do, on the other hand, places greater significance on soft elements. It incorporates some of the techniques employed in Han Taw Kuek (Korean Tai Chi).

Another significant difference between Hapkido and Han Mu Do is apparent in their differing approaches to training.

For example, during meditative qi (energy) training, a Han Mu Do student progresses from lying down to standing up, while a Hapkido student will either adopt a stationary standing or seated position. This gradual movement is connected to the fluidity of movement practiced in both Han Mu Do attack and defense.

When choosing a martial arts style to practice, it is critical to learn about the philosophies behind the style. Kimm purposely emphasized specific aspects in the practice Han Mu Do, and one should endeavor to understand why before beginning the practice. Only after embracing and immersing oneself in the true purpose of the practice are you able to fully dedicate yourself to studying it.

There are dojos all, over the world, that are now offering Han Mu Do classes. If you are looking for places to try out a class, you can easily go online and look. You can also check out the Harvest Martial Arts blog to learn more about the experiences and thoughts of one of Grandmaster He-Young Kimm’s students.

Justin Martin is a black belt and Certified Instructor of Han Mu Do (under
Dr. He-Young Kimm). He has a trained in multiple styles of martial arts throughout the years and has a passion for teaching martial arts classes for both adults and kids.