Did you know that Japanese martial arts are classified as modern or pre-modern? So before you train in Japan, lets explore some martial art tems that newbies are ignorant about.

In the past, many outside the martial arts circle have used “Karate” as a catch-all phrase to refer to all Japanese martial arts. That is a mistake.

Karate is a martial art on its own that didn’t even originate in mainland Japan. It came from the Ryukyu Kingdom (now Okinawa), which wasn’t part of Japan until the invasion.

Interestingly, Karate, together with Judo, Aikido, and Kendo, are considered modern martial arts. What, then, are pre-modern Japanese martial arts?

To help you understand the differences, I’ll first be explaining these umbrella terms that designate a martial art as modern or pre-modern:

Then, I’ll go on to explain two popular Japanese martial arts practised in the west.

These are less about self-improvement and more about defeating opponents.

Under the umbrage of Koryu Bujutsu are:

These skills were often practised with other military arts like horseback riding and swimming. There are, of course, different styles of koryu bujutsu. There are even ancient schools that specialize in different forms of jujutsu and weapon combat (check the link out for an extensive list of koryu bujutsu).

For example, jujutsu styles include Kito-ryu, Daito-ryu Aiki-jujutsu and more. There are organizations that verify the lineage of a dojo to ensure continuity, before certifying the martial art as koryu.

Koryu martial arts use the Menkyo system to grade students. This is a contrast from gendai budo that gives out martial art belt ranks.

Gendai budo focuses on self-improvement first and self-defence second. The older martial arts are the exact opposite.

Also, all gendai budo martial arts use the martial art belt system to rank practitioners. This system was first used in Judo, where Jigoro Kano used black to signify dan-grade and white for the rest.

Gendai budo covers a broad range of arts such as:

Logen has compiled an extensive list of modern Japanese martial arts related to the samurai and ninja.

There are many Japanese martial arts, as mentioned before. But, I’m pointing out Judo and Karate deliberately as they are common in the west and vastly different.

Beginners who make the mistake of thinking that one is the other could be in for a rude awakening. 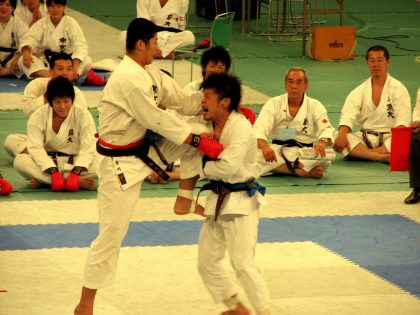 Karate developed on Okinawa Island during the reign of the Ryukyu Kingdom. It exists as a fusion of Chinese martial arts and the original “te,” or Okinawan martial arts.

The four original branches of practice were Shotokan, Wado-ryu, Goju-ryu, and Shito-ryu. The only one that didn’t start in Shuri, Okinawa, was Goju-ryu. It began in Naha.

Then, in the 1920s, Gichin Funakoshi introduced karate into mainland Japan.

The differences amongst the styles tend to be the stances used and the number of katas practised. Some styles use weaponry, while others focus only on training the mind and body.

For example, Shotokan uses deep stances and focuses on long-range attacks. The exact opposite would be Shito-ryu, where stances are more natural and upright, and the focus is on speedy footwork. In Kyokushin, rather than evading, knockdowns are frequent. Full body contact is also encouraged.

Note: All styles of Karate are Gendai Budo (modern martial art). This is a contrast to Koryu Bujutsu (old martial art – dating before the Meiji restoration period).

Where Karate is often called a “hard” martial art, Judo is “soft.” Karate focuses on striking, while Judo focuses on grappling and throwing.

Judo uses the concept of “kuzushi no ri” (breaking of balance) to overcome the opponent.

In a stereotypical illustration, a Karateka will strike an opponent unfalteringly and aggressively. The Judoka, though, will go on the defensive then try to evade then counter with grappling and throws.

How easy is it to find either pre-Meiji or modern martial arts?

Both koryu bujutsu and gendai budo are still practised throughout the world today. However, obviously, the modern martial arts are going to be widespread.

While you might experience holding a naginata at a samurai taiken (experience) event, you’re not going to find many places that will train you to use one. Moreover, admission to a koryu martial arts dojo is difficult.

For example, the oldest koryu art – Tenshin Shoden Katori Shinto-ryu – needs its students to swear secrecy with a blood oath (keppan). Risuke Otake (pictured above on the left) is the main instructor appointed by the headmaster Yasusada Iizasa.

As for gendai budo, simply do a quick Google search of your hometown, and a karate or judo dojo will pop up somewhere close.

Want to travel to train in Japanese martial arts? Logen and I will be compiling a list of recommended places in both Japan (and around the world) for you ninja adventurers! 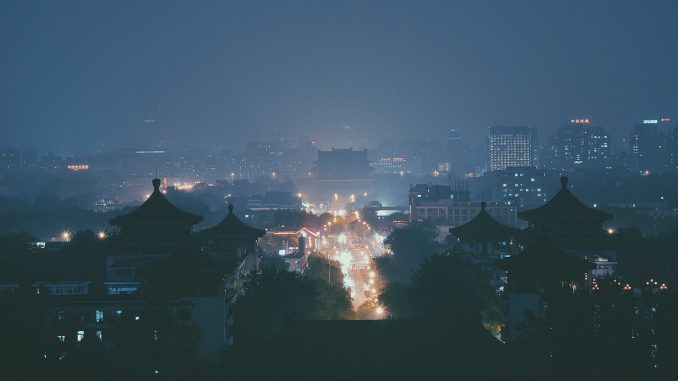