Once upon a time, Nara was the cradle of Japanese civilization (as the world knows it). The glory of ancient Japan continues to shimmer in the ambiance that surrounds the capital city of Nara Prefecture… and in the eyes of thousands of deer, all scouring the masses of tourists for delicious rice crackers.

Yes, you read that right. Deer.

Even before I stepped off the subway train that glorious morning, I had been told by countless people, including a Nara native, that the place would undoubtedly be teeming with deer. Of course, when I first emerged from the underground into the blaring sun to get my bearings, I did not see anything but people and convenience stores.

But within minutes of walking towards the Kofuku-ji and other UNESCO Historic Monuments of Ancient Nara, I found myself in the middle of a horde of hungry cloven-hoofed cuties and delightedly screaming children.

During this span of time, Nara was the capital of Japan. Empress Genmei, the 43rd monarch of Japan by order of succession, reigned Nara from 707 to 715.

The course of events that allowed her to accede to the throne were rather unfortunate. Her son, Emperor Monmu, passed away, and her grandson was too young to ascend to the throne.

However, in 715, Genmei handed the role of Empress to her daughter Gensho. This was a rare occurrence in the history of Japan, because most successions were done in favor of men.

Empress Genmei’s gravesite can still be visited to this day in Narazaka-cho.

The Nara period was a time of great literary development. Political and historical documentation grew in popularity, as did Japanese poetry, called waka. These poems were written almost purely in Chinese kanji, because a lot of kana had yet to be invented.

In fact, during the Nara period, Chinese influence was abound [1][2]. The Tang Dynasty of China never had to send envoys over, because the Nara courtiers were so enthused by Chinese culture, religion, and other practices that they traveled overseas to learn for themselves.

Buddhism was established during the Nara period, too [1]. During the reign of Emperor Shomu, the temple known as Todai-ji was constructed. Within the temple, a huge 16 metre tall, gilted Buddha was placed inside. Shomu’s daughter, Kouken, reigned as Empress from 749 to 758 brought many Buddhist priests into the court. After dealing with an unsuccessful uprising by her cousin, Furjiwara no Nakamaro [3], who had ruled de facto before Kouken’s reign, she resumed her rule over Nara as Empress Shotoku. Her reign lasted from 764 to 770.

The actions taken by Shotoku were rather progressive for the era. Upon taking the throne, she commissioned for the creation of 1 million prayer charms known as the Hyakumanto Darani. Before her death, she is said to have wanted to have a Buddhist clergyman ascend to the role of Emperor, but she died before those plans could be fulfilled. This led to the exclusion of women from imperial succession and clergymen from politics.

The End of Peace

Nara was peaceful until the end of the Heian period, when Taira no Kiyomori, son of the Heian leader, Taira no Shigehira, was ordered to smother the power of the Nara temples and shrines. Kofuku-ji and Todai-ji, the two main temples in Nara, were set on fire, resulting in tremendous damage and historical artifacts being destroyed.

During the Sengoku and Edo periods, Nara was a forcibly sucked into Osaka. This caused a great economic dependency on Osaka trade to firmly root itself Nara that is still present today. However, while many samurai forces moved throughout the area, there were no huge battles or cataclysmic events that reshaped Nara.

Why I Went to Nara

So, for me, the self-proclaimed samurai and ninja nerd to make my way out to Nara, you figure there had to be a catch, right? You know I didn’t just go for the deer. So what caused me gravitate here?

First, the Empresses of Nara were relatively strong, independent women for that time period. I am all for historical displays of female power… even if their actions did dampen the enthusiasm of courtiers and politicians for years to come.

Second, I firmly believe that in order to fully comprehend Japan, you cannot just focus on one piece of history. The Sengoku and Edo periods are fascinating, but there is so much more to unearth. For example, if you did not know where the samurai got their idea of Zen Buddhism from, or how karate traveled up from Okinawa, or that the katana drew inspirations from Mongolia, China, and Korea, then how can you hope to understand the essence of Bushido?

That is why I went—because modern day Japan would not be if it was not for the developments that happened during the Nara period.

Aside from the deer, which scaled up the awesomeness of the journey, I visited several key places in Nara:

All of these places were absolutely beautiful. I look back fondly on the sights, sounds, and experiences. I definitely plan to return again, even if it is just for a walk around Nara Park.

You will notice in the pictures that Kofuku-ji was undergoing some major renovations. The five-story pagoda and octagonal halls that you could see were almost surreal in beauty and detail. I stood beneath the shadow of the pagoda for about ten minutes, relishing the architectural prowess.

I unfortunately could not enter the Eastern Golden Hall, which is a National Treasure.

This was no doubt my favorite stop in Nara. I probably spent a good two hours wondering around the grounds. A lot of the historical sites, like the botanical garden, were closed because it was a Monday on a holiday week. But I thought of it this way: less crowds. I will let the photographs speak for themselves.

There are rows upon rows of lanterns scattered throughout the shrine grounds. Through the silence of the area, you can feel a very spiritual presence—almost as if a kitsune spirit is going to peek out from behind one of the primordial trees at any second.

Todai-ji (Map stolen by a deer) 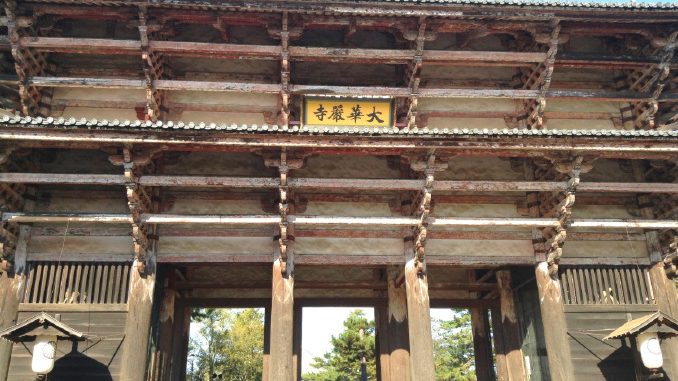 Something hilarious happened to me at Todai-ji. While I was standing in front of the gorgeous lake, reading my map, a deer came over and snatched the paper right from my hands. Apparently, paper equals dinner to these ever-hungry animals. I tried to pull the map away but to no avail.

Then, amidst the cacophony of thousands of different languages being spoken, I heard someone say in English, “She tried to get the map back and the deer was like, nope.”

Fellow American, save me! I turned about face and sighed, “I don’t know what to do.” In other words, do I let the deer eat died paper, or should I try to keep her from making a regretful diet choice? Eventually, three of us tackled the animal to free my map. As I shook salvia off my paper, one of my helpers help up their map. A giant hole was in the middle of it.

“This is what happened to ours,” she admitted with a chuckle. 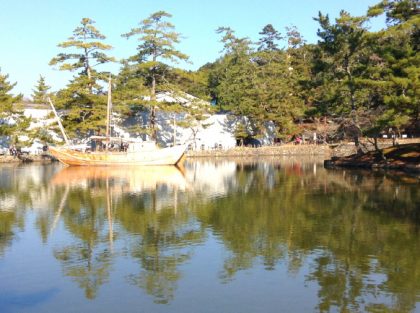 Map back in hand, I proceeded to the Todai-ji Museum to see the bronze Buddha. Regrettably, photography was not allowed, and I don’t think I can do the awe-inspiring quality of the Buddha justice with words.

The artistry was mesmerizing. Other figures and statues line the halls of the museum, providing insight to various Buddhist influences. Nothing in the museum was written in English, though, so if you decide to visit, you may need an audio translator (which are provided for free). 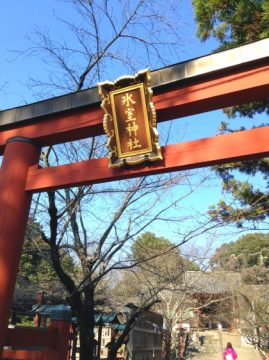 This was a delightful find that I would have never known existed if I did not get sidetracked by a pleasant walk through a preserved portion of town. Himuro Shrine is very small, but there is one defining feature that makes it a worthwhile stop. Housed at the shrine is the kami of ice.

In 710, Himuro Shrine was constructed as a pond for making ice. Nowadays, it hosts a couple of festivals throughout the year. You can still see the shrine decorated with candle-lit ice lanterns or head over in April to see the grounds covered in stunning sakura blossoms.

Why You Should Go

Honestly, if you love Japan, love culture and history, and want the chance to pet deer all day long, there is no reason not to go to Nara. The region is easily accessible from Nagoya, Osaka, and Kyoto; and the cost of excursions in the area is very reasonable. There are way more historical attractions aside from what I listed, as well as an absolutely fascinating downtown area. Plus, the people are extremely friendly and always willing to point you in the right direction.

If you find yourself in the region, make a side trip to Nara. You will not regret it.

Venture to Nara from Kyoto for the afternoon. Due to its past as the first permanent capital of Japan, Nara remains full of historic treasures, including some of Japan’s oldest Buddhist temples. Accompanied by your local guide, you’ll visit the Todaiji Temple to see Japan’s largest Buddha, Deer Park – home to hundreds of freely roaming deer, and Kasuga Shrine – Nara’s most celebrated shrine.