The 6 Types of Muay Thai Gyms in Thailand – what’s best for you?

While I was in Bangkok trying out Muay Thai, I assumed that all gyms were similar. Maybe there’d be obvious differences in rural and city gyms, but everything else would be the same… yes?

This simplistic view couldn’t be further from the truth.

As the Thais would say, “Same-same, but different.”. And, damn different they were. I had realized this after training at various places.

But, what was different?

For one, there were noticeable contrasts in target market and vibe. Likewise, the modus operandi of each Muay Thai gym varied.

Where the gym at home targets recreational practitioners (and the occasional fighter), Thailand has a huge training scene for fighters. Not to mention, it being the birthplace of Muay Thai, has opened up a tourism for the combat sport.

Clearly, these give you a lot more training options in Thailand. Your only problem is to pick the right type of gym for you. Here’s a guide that breaks it down.

Why Muay Thai Gyms Differ in Operations & Clientele? (in Thailand)

Be Muay – Muay Thai Boran (via Way Of Ninja)

How a gym/school gets its revenue determines how it operates, and the kind of people it attracts. So, income model is a major factor that influences the differences in each gym/school.

Here’s what I mean…

Traditional fighter gyms get a cut of their fighters’ winnings, and ring-appearance fees. This is only fair because they’ve sponsored the fighter’s training. So, the traditional nak muay gym regards a sponsored fighter as an investment.

Conversely, Muay Thai schools gets its revenue from teaching the art. They also get their income from offering trainer certifications.

Hence, when you look beneath the surface, it becomes clear why many gyms open up to tourists and wealthy locals. They need to survive and profit.

With income underpinning the differences, here are some attributes that gyms differ in.

As you can see, these attributes are not exclusive. They often overlap. That’s why it took weeks to categorize the types of gyms/schools into neatly-defined boxes (unsuccessfully).

I realized that the best way to group them, is to examine their focus, and acknowledge their overlap.

And so, here are the six types of gyms/schools in Thailand. Pick the right one for yourself.

Muay Thai schools focus on teaching Muay Thai, rather than training fighters. Their syllabus caters to students of all levels. And, they offer certificates for different grades.

This makes Muay Thai schools better suited for beginners, and anyone who wants to be graded.

Muay Thai schools also certify trainers, instructors and referees. Some certificates are more reputable than others – the government-backed MTI (Muay Thai Institute). As such, any fighter that seeks instructor certification should do it there.

This serves to promote Muay Thai as a sport globally.

Despite being a place that teaches Muay Thai, most schools do train fighters.

Don’t forget that Muay Thai – in its long history – has always been a pugilistic sport. Hence, it’d be uncharacteristic for any place that claims to teach Muay Thai not to train fighters.

Moreover, in the MTI, you need to fight professionally in 3 to 5 fights once you reach level 4 certification.

TL/DR: Great for beginners, and people looking for trainer/instructor certification.

Recreational Muay Thai gyms are similar to gyms you can find at home. They cater to recreational practitioners, and a small number of pro fighters.

Their target clientele are middle/upper class locals and foreigners, who do Muay Thai to keep fit. That’s why it’s not uncommon to see these gyms offer other training programs like CrossFit or BJJ.

Does this mean you should avoid training in recreational Muay Thai gyms?

No. These gyms often offer specialized programs for fighters. Their trainers tend to also be top notch. Of course, this varies among recreational gym.

In fact, there are some gyms (in this category) that have superb programs for fighters. And, they also have the connections to fight promoters and organizers.

One such example is Khongsittha Muay Thai – reviewed positively by fighters despite not being a fighters gym. As a beginner, I liked how they focused on technique (and not assume I’m yet another person who does it to lose calories).

TL/DR: Great for beginners and recreational practitioners. Depending on the gym (and its trainers), independent professional fighters can consider training here.

Muay Boran is the ancient form of Muay Thai. It’s stances are lower, and syllabus contains many forbidden techniques in ring fights.

Many schools that offer Muay Boran do it to preserve the art (and provide a primer to curious tourists). Often, Muay Boran is taught alongside Muay Thai.

Most schools welcome both locals and foreigners. And, they’ll teach you a lot about Thai culture and history.

One great place to learn Muay Boran at is Be Muay (located conveniently in Bangkok’s city centre). Kru Suphan is an amazing master.

TL/DR: Suitable for anyone seeking instruction in Muay Boran, and an understanding of Muay Thai’s historical underpinnings.

Traditional Nak muay (or Fighters) gyms focus on preparing professional fighters for fights. They do not teach recreational beginners.

Trainers there would assess a fighter’s opponent in an upcoming fight. Then, they’d train their fighter to counter his opponent’s strengths and weaknesses.

Most traditional fighters gyms have a higher proportion of sponsored fighters. After all, these gyms make money from the winnings and resulting bets on their fighter’s fight. 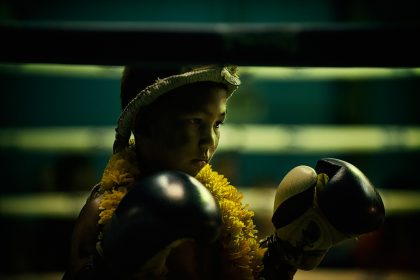 Rural Thai families send their sons to these gyms to become fighters (often due to poverty). At times, it could also be because the child has an interest in the sport.

Depending on the child’s potential (and passion), the gym may arrange to sponsor him. They then teach Muay Thai to the nak muay (professional fighter), who can be as young as ten years old.

TL/DR: These camps are not suitable for recreational practitioners. Likewise, complete beginners should look elsewhere for training. However, amateur and professional fighters can benefit from training with the local fighters there.

Due to the size of the camp, and quick tourist turnover, you’ll likely get less attention from trainers. This generally means your training won’t be adapted towards your strengths and weaknesses.

TL/DR: I’d avoid purely tourist camps. For recreational beginners it may be okay though.

Modern/Hybrid fighters gyms prepare fighters for fights, like traditional ones. They sometimes overlap in categorization. As I’ve mentioned, many traditional gyms open up to foreigners for survival.

So, how do you make a distinction?

Look at how they primarily fund the camp.

Modern/Hybrid fighters gyms rely on independent fighters for income and profit. These fighters, be it local or foreign, pay training fees.

Related:  5 Things that Will Affect Your Muay Thai Experience in Thailand

Traditional nak muay gyms rely on sponsored fighters. They pay for the fighters expenses, and pocket a cut of the fighter’s winnings. That’s how they make money. While many welcome foreigners and independent fighters, the training fee is used to defer expenses (not profit).

That said, there is little difference in the quality of training between the two. Both have produced top fighters.

However, you may want to train at a modern fighter gym because of the local-foreigner ratio.

According to Aaron Jahn’s standards, a good mix of foreign and local fighters in a gym is desirable. Training with Thai fighters help you progress in your clinching technique.

Yet, without foreign fighters, you may find that you outweigh all local fighters.

What about complete beginners to Muay Thai?

Unlike traditional nak muay gyms, most hybrid gyms run a beginner’s program. If they do, go ahead and train there. And, try to train for at least a week if you do. It increases your chances of jostling with fighters there.

TL/DR: Great for fighters due to the Thai-foreign fighter ratio. You get the best of clinching progress and sparring style. Also good for beginners who can commit at least a week there.

Muay Thai retreats are events where fighters and enthusiasts gather to train together. You get to learn from each other. Seminars, on the other hand, are events where one or more kru instructs.

While most of these events welcome people of all levels, I don’t think beginners will be able to get much out of it. After all, most seminars do not cover the basics, and jump right into technical explanations.

Nonetheless, you can keep an eye out for beginner retreats and seminars.

TL/DR: Mostly for experienced fighters and practitioners, unless the event specifies otherwise.

Unfortunately, when you get to train in Thailand, you’ll find that the different gyms cannot fit into perfect categories. There are definite overlaps in many. Just be aware of these factors, and pick out a training facility that matches.

Having defined the types of gyms in this article, I’ll post the reviews for the gyms I’ve visited back in June.

P.S. I’ll be updating this page with a list of Muay Thai places to try out. In the mean time, check out BookMartialArts’ listing for martial arts packages that include both training and accommodations.