When Japanophiles hear “Osaka,” they immediately think about Dotonbori, the Momofuku Ando Instant Ramen museum, and Kansai-ben (the dialect of Osaka that became popular throughout Japan through slapstick comedy skits).

But, long before Osaka became a sprawling metropolitan area, it was a hotspot for battles (during the Sengoku era). Many great men rose and fell in skirmishes there. But one name resonated more than the rest — Sanada Yukimura.

Before we go back in time, comparing present-day Osaka to both Nagoya and Tokyo is important.

If you’ve never been to any other place in Japan aside from Tokyo, Osaka will come as a surprise. And, not just for international tourists either. I lost count of how many confused Tokyoites I saw on the escalators…

Standing on the left on roadways and staircases was a habit formed during the time of the samurai. Since samurai wore their katana on the left, it made sense to keep it away from passersby (moving in the opposite direction).

I later found out the reason for this difference. Where Tokyo had numerous samurai, Osaka had more merchants. Crossing swords was not an issue.

In fact, the history of Osaka [1] is rather unique. Around the 5th century, Osaka was the cultural and political epicenter of Japan. This was long before Nara, Kyoto, and Tokyo thereafter. Influences from Korea and China poured into Japan through Osaka.

After the unification of Japan in 1583 (by Toyotomi Hideyoshi), Osaka once again became a pivotal location. This time it was due to the construction of Osaka Castle.

During the 17th to 19th centuries, when Edo was the capital of Japan, Osaka was a budding international hub of trade [1].

Nowadays, a common greeting in Osaka is not “How are you?” (お元気ですか。) but “Are you making any money?” (もっかりまっか。). 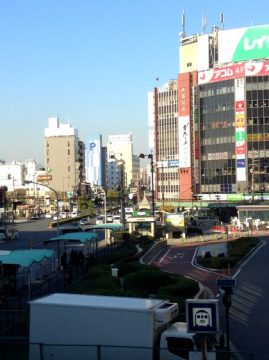 Of course, the other common practice in Osaka is the eat away your paycheck. In Tokyo (and Nagoya to a lesser extent), people would rather go without food to afford clothing. Or engage in something they enjoy—like overworking!

So why am I mentioning these things?

Knowing how history inter-meshes with the present helps with cultural understanding.

Japan as a whole is so proud of where they come from. That’s why historical sites are more revered, and customs continued to be practiced so fastidiously.

It is also the reason people carry on the arts of the samurai and ninja. And, also, devote endless stories to their past exploits through anime and performances.

I mean, when was the last time you heard about Europe or America making an animation or best-selling novel about ancient civilizations? Western films aside, it rarely happens.

Walking Through Osaka to the Castle

So, as I took a walk through Osaka in the early morning hours, the sun peeked through the thick clouds. I thought about the hidden shrines and temples down the alleyways, and the castle that awaited beyond the high-rise buildings. The air was scented with miso and oil, and the sigh of car tires over damp pavement was at every turn.

About the time I reached Osaka Castle park, rain began to patter against the asphalt. 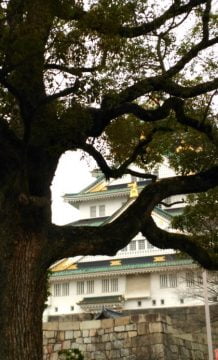 Over the speakers surrounding the fountain, I heard Christmas carols. Though I did not get a picture of it, the tour train for children (or small adults) was decorated with wreaths. The driver was dressed up as a very slim Santa Claus. With the uppermost reaches of Osaka Castle poking through the trees, it was quite a surreal sight.

I tailed a group of Chinese tourists up the steep pathway to the outer court of the castle, through the pine and cherry tree orchard. Remains of the castle walls bordered the moats. As I came around one corner, the tour group went straight, and I moved towards the Hohoku-jinja. 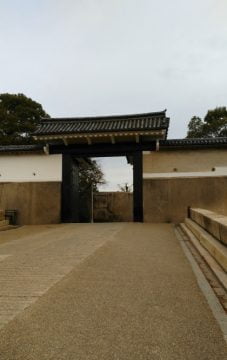 Because it was so quiet, I crept towards the front of the building. Then, I crossed the yard to the Shudokan — a training hall for marital arts.

Before the Sakuramon Gate, there were several flags printed with the kanji characters for Sanada Yukimura. Moving beneath the massive gate, I took a moment to shake off the rain that was now soaking through my jacket. And, I scanned the pathway leading to the courtyard. 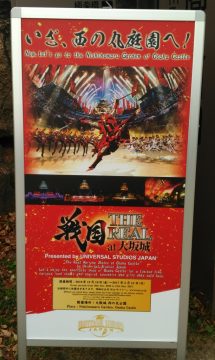 Despite the inclement weather, there was going to be an event of some sort. That evening, in the Nishinomaru Garden, a performance called Sengoku: The Real at Osaka Castle.

I’d have loved to stick around, but I had a plane to catch. I do think that choreographed samurai battles are quite a spectacle, though.

When I walked around the courtyard, there were pictures posted on a wall-blocked area under construction. It detailed the battle around the castle as well as the growth of Osaka.

Turns out, there was quite a bit about Sanada Yukimura, Toyotomi Hideyoshi, and Osaka Castle that I was unaware of. 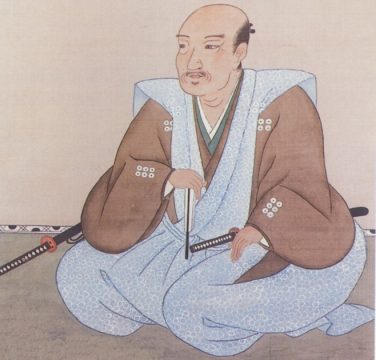 Many people think of Oda Nobunaga and Hattori Hanzo as demons of the battlefield. Yet there was another. The life of Sanada Yukimura, one of Japan’s most popular samurai. He depicted what it meant to be a warrior of the Sengoku period.

In 1567, Yukimura was born as the second son of Sanada Masayuki. He was a samurai who was among the few men Tokugawa Ieyasu actually feared [2].

In 1585, Yukimura is sent to Kaizu Castle and Kasugayama Castle as an Uesugi captive. During the Battle of Ueda, Yukimura was pitted against the Tokugawa and Hojo and wins.

There is then much debate about how the Sanada clan moved around from daimyo to daimyo. Though for a time Masayuki, Yukimura, and his older brother, Nobuyuki, all served Tokugawa. Yet, in 1600, during the Battle of Sekigahara, Yukimura and his father joined the western forces under Uesugi. Nobuyuki joined Ieyasu instead.

Yukimura and his father returned to Ueda Castle, and held up with only 2000 men against Tokugawa Hidetada’s much larger force. After the battle, Yukimura and Masayuki were exiled to Koya-san on the Kii Peninsula.

There he stayed for 14 years.

In 1583, after Oda Nobunaga had passed away, Toyotomi Hideyoshi realized the plans of the Oda. And, he unified the nation of Japan under a single name.

Toyotomi wanted to build a castle that modeled Oda Nobunaga’s residence. But, Osaka Castle’s blueprints proved to be much more intricate than any other castle of that era. Over time, Toyotomi expanded the base of the castle, making it more and more defensible.

In 1597, construction finally completed but Hideyoshi had already died. So, the possession of the castle transferred to his son, Toyotomi Hideyori.

After the Battle of Sekigahara in 1600, Tokugawa Ieyasu built his own bakufu (shogunate) in Edo. And, he sought to overthrow Hideyori’s rule in Osaka.

In the winter of 1614, the Tokugawa forces marched upon Osaka with an army of 200,000 men [3][4]. Upon hearing that his nemesis would attack Toyotomi, Yukimura left exile.

He realized that Tokugawa would target the southern side of the castle, where defenses were lacking. So, he built a barbican (outer defence) called Sanada Maru.

Though Toyotomi’s men were outnumbered, Yukimura tactfully used the castle defenses to deliver a crushing blow.

A pact of peace was made when Tokugawa told Toyotomi to destroy the outer moat to the castle. Despite the accord only concerning the outer moat, the Tokugawa forces dismantled the inner moat as well. But, it only took a few months before Hideyori attempted to reconstruct the protective walls of his castle.

In 1615, the infuriated Tokugawa Ieyasu attacks once again in the Battle of Tennoji. While there was a separate siege on Osaka Castle, Hideyori planned a counterattack.

Yukimura was supposed to meet up with Akashi Morishige (another samurai) after retreating from the Battle of Doumyouji.

Sanada attempted to attack the backside of Ieyasu’s army, cutting down hundreds of men. But, he was eventually injured during the battle.

There are many stories speculating who took his head, or where he was decapitated. But his final message continues to echo throughout history: “I am tired and must rest. Go on and take my head” [5].

How to get to Osaka Castle?

So as I stood on the hallowed ground before the impressive Osaka Castle, I thought about the thousands of lives that died to protect that earth.

I tried to picture the hundreds of tents set up, the clangor of weapons, and the voices raised in eagerness for battle. The area was surreally quiet, save for the custodian singing old fishermen songs as he raked leaves from the gravel. 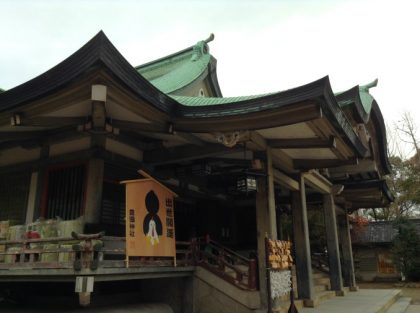 I realized that I cannot even wrap my mind around the past. I can only view it and continue to experience what evidence remains.

Osaka, like the rest of Japan, is packed with interesting historical nooks and crannies. If you seek out the experiences, they are everywhere.

Unfortunately, due to time and season restrictions, many outdoor sites I wanted to visit would be difficult to get to (or were closed).

My recommendation for fellow travelers is to visit Japan in the autumn or spring. That’s when the temperatures are perfect and the landscape is awash in vibrant hues. 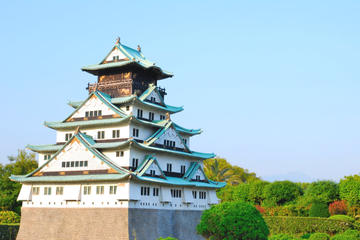 Follow an expert guide on foot to principal landmarks in Osaka during a full-day walking tour, departing from Kyoto. Visit Shogun exhibits at Osaka Castle and look as far as the eye can see from the Umeda Sky Building’s Floating Garden Observatory. Then join your guide on a 1-hour river cruise on the Aqua Liner, coasting past the Twin Towers and City Hall of Nakanoshima lsle. Lunch and round-trip transport from Kyoto are included.

Which Type of Spartan Race Should You Get Started With?