The Ninja Gym in Shinjuku is tucked away in the alleyways of Kabukicho. The quiet is an unexpected turn from the roaring excitement of Golden Gai and brilliance of Kabukicho.

I found the location rather easily though, as there are several signs out from written in both English and Katakana about a kickboxing gym. On Google Maps, you will find it listed as a late night gym. Don’t let the opening time dissuade you, as the owner holds the Ninja Taiken Training from 5 to 6pm every day.

Personal Goal – To use what I learned about ninja previously

I went to the gym with a goal in mind: to employ what I have learned about ninja and samurai up until this point. Those points were:

Some of these are, of course, pieces that come together to form the face of ninjutsu. Others are purely personal pursuits.

The Choice of 3 – What you want to train in

When it comes to what you want to train in, you are left a lot of room to choose. This flexibility in the program means you can work with any existing experience you have had or try something completely out of left field.

Regardless, Sensei is happy to oblige. I found it nice that he was willing to say when something wasn’t his specialty… Though he looked like a master regardless.

So what were my choices?

We started off with some warm-up movements of rolling and weight shifting. As a dancer with a lot of ballet influence, I’m always thinking up. The Japanese focus on down. For this reason, I always have a little impedance when trying to get low… But once I quiet the mind, it gets easier.

If you’re not entirely flexible or not comfortable with doing somersaults, don’t hesitate to tell Sensei. He is understanding and patient. Besides, not all ninja rolled and crawled around – although that is the popularized component of ninjutsu mostly known worldwide.

Next, I learned several techniques for using a person’s own body against them to escape. My main focus was “as a woman, what should I do in the event of _____?”

Rikiya-sensei was quick to reinforce what Narashino-sensei from the Musashi clan had explained. Instead of trying to fight back, go soft. Look for weaknesses in how the opponent is standing or holding on to you.

For example, if someone has a hold of your shirt, you can easily reach up and joint-lock their thumb by curling it inward. The average person won’t like the feeling very much and will release you immediately.

Next, let’s say someone has your wrist. Push against them once, then quickly bring your arm towards yourself (hinge joint). As you lengthen the enemy’s arm, twist your arm just enough to break through the point where fingertips meet the thumb.

We also practiced pivot steps mixed with kicks to the knees and jabs at the eyes. It’s been awhile since I had an actual full tang blade in my hand. Get too used to swinging a bokken (wooden practice sword) and you quickly forget how to respect the real thing. I explained to Rikiya-sensei that I have prior experience with Kendo. However, I must confess, when sheathing the darned thing, I would’ve committed hara-kiri accidentally…

I got it down after practicing several times though.

Several thrust techniques, paired with blocking and disarming were thrown at me. I love how movements sequence together. Rikiya-sensei explained these kata and kamae movements as something of building blocks, where you master the basics then, like video game combo moves, gain the ability to move more fluidly through various strikes and defends.

Because we started diving too deep into the bushido aspect of sword-wielding, I broached the question of how ninja would use and move around swords. First, because houses in Japan back then had low ceilings, and because ninja moved about in very tight spaces, swords were considered cumbersome.

Yet, when it came to stopping an oncoming sword attack, ninja would sweep in, grab the space on the hilt between the samurai’s hands then use the same twist technique from that Taijutsu section to redirect the blade to the samurai’s throat. Rikiya-sensei did this to me and I was momentarily stunned by the precision.

Last, I was handed some shuriken. Throwing stars, my specialty, came first. I need to practice more with bo-shuriken, the needle ones. So I did. I got the needles to fly through the air properly, but I couldn’t get them to stick. One that sunk into the cardboard though was actually backwards.

While practicing the motions, I asked Rikiya-sensei a little bit about his history with martial arts and ninjutsu. As someone who has practiced martial arts for some time, his expertise, he explained, lies not in swords and weaponry, but in hand-to-hand combat. Musashi clan ninjutsu and the like is actually rather new to him. In that light, the accessibility of ninjutsu to anyone, even the inexperienced, is seen.

In conclusion, I think anyone who wants to really, really wants to concentrate on a specific weapon or combat technique would greatly enjoy the Ninja Club Shinjuku Gym. Although it is only about 1 hour in length, Rikiya-sensei is very knowledgeable, extremely welcoming, and no pressure. That creates an ideal environment to training the mind and body. You can really pick up on the nuances of movement that the ninja held so dear.

You can visit Rikiya-sensei’s blog and learn all about the Ninja Club Shinjuku Gym. There are videos that have been uploaded (not with my maladroit butt, thank goodness) featuring some of the things that you can learn.

(see below). You can now make a booking at his gym via Voyagin (US$37.15). Also, don’t be afraid of a language barrier. Rikiya-sensei is well versed in English. Or bring a Japanese friend for interpretation.

The cost breakdown is as follows:

Experience the Ninja Gym in Shinjuku 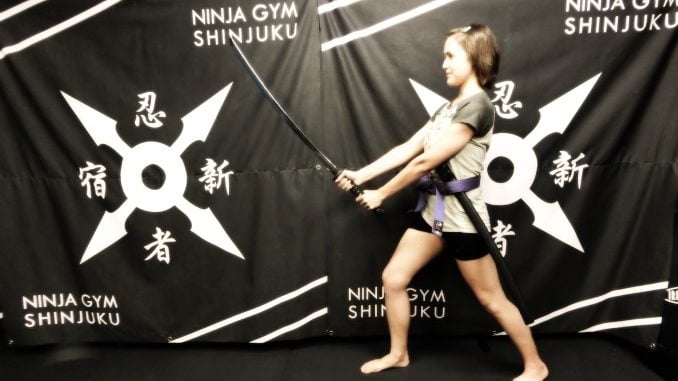 Editor’s note: The terms ninjutsu and ninja are used in their loose definitions, which include modern interpretations of the shinobi (i.e. not strictly historical).