Samurai Museum in Tokyo – One of the best experiences! [Travel Report]

When I heard about the Samurai Museum in Shinjuku, you could only imagine the excitement a Japanese history nerd like myself felt. I was, honestly, stoked.

The ratings on Trip Advisor were what sold me, and the fact that it’s in Kabukicho of all places is pretty exciting. Because the surroundings are so modern and wild, you would think finding anything educational would be impossible. But the Samurai Museum is a delightful sanctuary for those who want to delve into the history of our favorite Japanese warriors, from beginning to end.

The outside of the museum is relatively nondescript, save for the samurai kanji on the facade of the building over the doorway. If you aren’t looking for it, you won’t find it, so I recommend bringing along a handy-dandy GPS for the journey. Getting lost in Kabukicho is only fun for a short while.

Beginning the tour at the Samurai Museum in Tokyo

Once you are inside, you are greeted by a truly friendly group of people who speak English and Japanese. The tour guides are really welcoming and know all about the artifacts on display in the museum. Now, it’s not a large museum, and for that reason, the little that they do have holds great value. You are allowed to take photographs of everything but paintings from the Battle of Sekigahara. Filming is never allowed.

The beginning of the tour starts you out in front of a collection of samurai armor from various eras of Japanese history. The various colors and materials are explained at length. For example, how the samurai didn’t wear a lot of metal in the beginning. Many components of the armor were fabricated from lacquered wood or animal hide. This includes sword scabbards.

When you are done looking at the first row of armor, your attention is guided to one of the two paintings about the Battle of Sekigahara. In a total of 6 hours, thousands of samurai rushed in for their honorable deaths. At the first sign of impending doom, the generals began to commit seppuku.

At this point in the tour, a man asked, “Why do some of the banners have the Christian cross on them?” 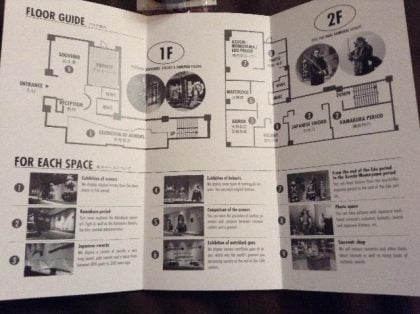 The tour guide answered with how missionaries from Europe and China were bringing in Christianity during that period, and so a lot of people had converted over to Christianity. Currently, Japan has a blend of Buddhist and Shintoism beliefs. Should you ask a Japanese person about their religion, however, they will say they aren’t very religious at all. To an outsider, the fact that they pray to shrine spirits might come off as religious. To the Japanese, it’s purely cultural.

Anyway, the Battle of Sekigahara was not about religion but about the establishment of a new era. And a new capital. Though the war was fought in Kansai, the new capital was made in the Tokyo region. The ushering in of a new government brought about some changes to how samurai fought and why, as well as the development of specialized weapons.

With the first floor explained, we moved up toward the second floor. Here you must remove your shoes. In the first room, there is a small boy’s armor, which used to be presented to young warriors in the hope that they would grow up strong and brave. The same space also featured relics from when Mongolians tried to invade Japan in the 1200s. When the Mongolian ships attempted to cross the sea of Japan, they were overwhelmed by a typhoon.

This typhoon was one of first instances where “kamikaze” or “divine wind” was used.

One could only imagine how different Japan would be had the Mongolians succeeded in their invasion.

Another room has some weapons regularly used by samurai during the early warring ages. I found this intriguing. The first sword is over 800 years old. Let that sink in. It was also fairly different in construction than some of the more modern ones. Slightly flatter blade, less of a curve. As you go done the line to the 200 year old sword, which was by far the longest and most slender, you see how knowledge of warfare influenced sword construction. One thing I learned was that a samurai sword could only kill a maximum of 3 people per battle. After that, it would be far too dull to cut anything. Obviously, during war, you can’t just whip out a whetstone to sharpen your own sword. So, the samurai were forced to kill enemies and pick up a new sword to keep fighting.

There were also two spears. One had a pretty fascinating hook that, when it met the blade of a sword, could be twisted to break the metal. Another sword looked akin to a scimitar. It was explained that such a blade was not used for people very often but for cutting horses’ legs while they ran.

The following exhibit housed another interesting element to samurai history: the unique designs chosen by some warriors for their kabuto, or helmets. I think it’s intriguing how the rabbit looked like a jack-a-lope, the demon looked like a cow, and the butterfly looked like…fish scales and fins.

On the quiver for arrows is a dragonfly. The tour guide explained that dragonflies came to symbolize the samurai spirit. A dragonfly can only fly forward or side to side, never backward. So in the way a dragonfly can keep progressing, so to do the samurai. In other words, never look back. Never falter.

At this time, while we should have moved onto another room, the group I was in was told that there was a special sword demonstration taking place. So we moved to the small event space, which also has the final pieces of the museum’s collection. There, a samurai appeared. He moved to the center of the room proudly, gave a humble bow, then took a moment to meditate.

In the quiet, someone started questioning what he was doing. But then the samurai picked up his sword and began to shift into a whirlwind of kendo kata straight out of Rurouni Kenshin. I loved it. The display was epic. Every twist, turn and strike was clear and precise. You could visualize the invisible enemies surrounding the demonstrator clearly. Then he broke down each movement and explained what the name was and how it would be used in battle (offensively or defensively).

Afterwards, one of the fellow tour members confessed, “I wouldn’t have sat front row and center if I knew the sword would be coming at my face the entire time.” Of course, it wasn’t a sharpened blade. Certainly shined like one though!

At the end of the demonstration, there was a short Q&A session for the demonstrator. He told us that he was not actually a full-time samurai but an actor for samurai dramas and films. A lot of what he’d shown us was actually movie choreography. Secondly, he had studied kendo for some time during middle school but only got into kendo for work. Recent studies provided him with a more in depth understanding of swordsmanship.

The tour then continued.

Famous samurai and use of firearms

The second to final room was about firearms. Nobunaga Oda was one of the first to employ various guns in combat. On display were short and long range firearms. My favorite was the one that could be used to rain molten lead down on castle walls.

Lastly, you enter the room where the demonstrations take place. Here you are introduced to pictures of Uesugi Kenshin and Takeda Shingen, whose 12 year war ended in a stalemate. The last battle between them was said to be the last real battle of the samurai, for no guns had been used.

The armors of Oda Nobunaga, Toyotomi Hideyoshi and Tokugawa Ieyasu are lined up. Our tour guide didn’t say much about who these gentlemen were, so if you didn’t already know much about them or read the plaques, you’d be a bit lost.

Upon sighting the black armor Oda had sported, the little boy in the group pointed at it with his toy sword and exclaimed, “It’s Darth Vader. He’s my enemy!”

I always find the humongous golden rays of Toyotomi’s helm rather impressive. One has to ponder how he ever kept his posture when sporting that thing. And how he wasn’t an easy target. Same with Tokugawa’s golden armor. Since gold is a weaker metal, it’s fascinating that someone would want it for protecting their life.

In the same room are artifacts from Sakamoto Ryouma. A recreation of the western styled boots he’d sport–and the small caliber pistol tucked inside–was on exhibition. There was also a brief mention of the Shinsengumi prior to the Meiji Restoration. As many know, when the Emperor Meiji imported influences from America and Europe, the use of samurai dwindled drastically. Soon the samurai faded out, leaving the relics of hard fought wars and a warrior spirit seared deep into Japanese culture.

The museum features classes that you can take throughout the week, like calligraphy and sword handling. On specific days, you can also have a professional photo shoot while dressed up in armor or a kimono. There’s even child-sized clothing. Optionally, you can visit the souvenir shop. The katana in sale are breathtaking. Better than those found on Nakamise-dori in Asakusa. You can also pick up some ninja-related trinkets, including foldable ninja socks.

If you are looking for an easy to view museum in the middle of a major tourist point, then head to the Samurai Museum. Though there is not a lot on display, the armor and weapons are rare finds. The information is detailed, but slightly scattered, in my opinion. There doesn’t seem to be a set order to how the history is explained. It’s befuddling if you don’t have some basic knowledge on samurai and the eras throughout Japanese history, but the museum does what it sets out to do: to enlighten those curious about the samurai.

Getting to the Samurai Museum

Book your tickets to the Samurai Museum 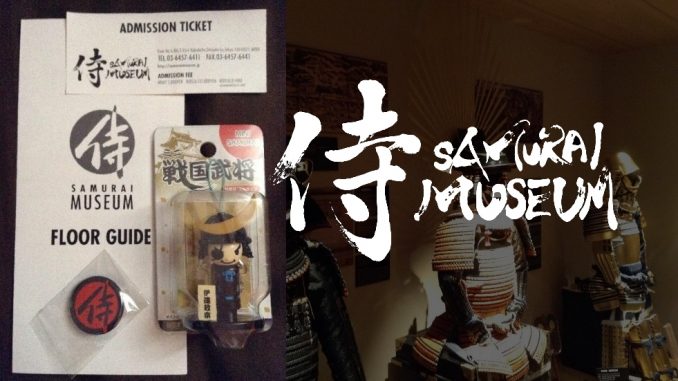